Hope all is well and amazing with you and yours. Things over here have been very busy and super exciting with me hence the reason I have been lax in the blog department but that wont be the case anymore 🙂 for a little while at least. My personal goal is to post as many as humanely possible in the next week or so. Including some demo apps and a much requested review of the Dinair airbrushing system. 🙂 After finishing my first of MANY makeup classes I hope to take in the next year, my eyes are wide open with possibility, inspiration, and motivation. I can’t stress enough how fully blessed  I am and how I want to do everything in my power to make all my dreams and the dreams of my loved ones come true.

Now on to the topic at hand…

Ok, so about a year ago the cosmetic and skin care industry got hit with a HUGE Asian invasion in the form of BB creams. I would like to take this time to point a few things about BB (stand for Beblesh Balm) creams. Firstly, the BB creams of America (or at least the ones that were out when I first starting researching them last year) are VERY different from the BB creams from Asia where the product originally gained most of its popularity starting in the 1980s.  They were invented by a German plastic surgeon in the 1960s for post op patients who were recovering from laser surgery. Once they hit Asia they became the go to product for anyone in the tv or movie biz over in South Korea where the product is HUGE. Many south korean soap opera actresses have attributed their “beautiful, dewy, no makeup look” to BB creams. The main draw to these products is that they are intended to act as a one step miracle product for skin care. It boasts abilities to moisturize, prime, treat, whiten, heal, brighten, and cover your skin all in one fail swoop. Who doesn’t LOVE the idea of a product that will give your skin ULTRA hydration and nourishment while covering up the imperfections you currently have? There are TONS of formulations out there right now both on the Eastern and Western market available but (in the Asian market) there aren’t many choices by way of shade selection. I lived in Japan for a few years and un like us they are always doing things and using products to make themselves paler so as you can imagine the colors are VERY light for the purpose of giving them a porcelain colored complexion. I’ve seen construction workers out in the BLISTERING heat wearing long sleeve shirts, jeans, hats, and handkerchiefs over their faces to keep the suns rays off of them. I think a sun burn beats heat stroke any day but that’s just me :). I knew that when it came time for me to try a BB cream I wanted to start with the Asian original versions then work my way over to our versions of them.

I decided to start with the SKIN 79 Hot Pink Super Plus BB Cream. 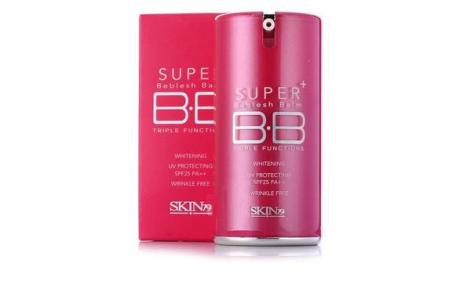 The folks at Skin79 claim that it’s a 10-in-1 skin care step, although when reading the product info on the website they only make mention of 5. But they are “Whitening+Wrinkle Improvement+Sebum Control+Moisturizing+UV protection”. The whitening agent in the BB cream was most interesting to me at first because its intention is to lighten up redness from blemishes and brown spots on your face (i.e. Freckles). Anyone who has seen me without makeup on will tell you I have lots of little freckles on the nose and despite the fact that everyone thinks that they are wicked cute I HATE THEM…so this was a bonus for me 🙂 When I was researching this product and where to go about ordering it, I found that getting it from places like Amazon or Ebay could be a little tricky because people were selling “fake versions” of it. Which prompted Skin79 to add a certified label of authenticity to it. Like so:

There it retailed for $28.oo. Shipping wasnt crazy expensive and it arrived in about a week.

Heres what it looks like out of the bottle:

I squirted out one pump on my arm then used that drop to spread out a few stripes next to each other to illustrate not only how pigmented it is but also how a little can go a really really long way! It has a light rose’ish scent to it as well.

Here it is spread out a bit on my forearm:

I have had this product for about two months now. I don’t wear it everyday, and I have only tried using it as a primer once. Usually I just throw it on when I’m in a hurry and top it of with some pressed powder. The color is rather odd when it comes out of the bottle. It looks like it has almost a grey undertone in person. The color is pretty lite….even when I don’t tan (sunless) its still a little too pale for me to wear on its own. But when I do put it on, it is SO hydrating and creamy on my skin. It feels like a huge ice-cold drink of water for my complexion. I have heard that some BB creams oxidize and “adjust” to your skin tone after time but I can’t really say I have seen any evidence of that. I put some powder on top (usually MAC MSF in Medium Plus or Medium Dark depending on how tan I am at the time) to set it and get it to match my skin color. When you put it on, its opaque enough that I can’t see any redness or freckles at all once I do. It’s almost as much coverage as foundation but not nearly as sheer as a tinted moisturizer can be.

It’s like a tinted moisturizer in that the lasting power isn’t SUPER impressive but if you make sure to keep it powdered it seems to be just fine.

Now the big question: Does it do what it claims to do?

I think that it does. But I think it would take a few more months of using it to see the full effects. Any red spots I have left over from break outs are a bit lighter and my freckles too but nothing SUPER crazy as of yet. Like I said I don’t wear it all the time so that probably has something to do with it. But I will say that my skin is crazy soft and moisturized now. I don’t have any wrinkles yet (thank gawd) so I couldn’t tell you if it does do anything about them.

I CAN say…I think I am a life long BB cream addict. I love having something I can throw on when I don’t want to put on a full face of foundation but don’t have to worry about the coverage being too sheer AND the fact that it is feeding my skin lots of awesome goodies throughout the day is even more amazing to me. I cant wait to see what my skin looks like a year from now if I continue using BB cream. I don’t think I will re purchase THIS one super soon…because I do want to try different ones when I have one that runs out for review purposes. But that’s not to say that I don’t LOVE it.

Hope this review helped you guys..I cant wait to do more reviews on BB creams in the future because I am so pumped about them! Its a dirty job but someones got to do it 🙂 🙂

My name is Whitney Hedrick. I am an aspiring makeup artist and newbie beauty blogger based out of Las Vegas :) Im a fan of Tim Burton movies, sushi, sugar free red bull, 50's style pin up girls, The office, post hardcore rock music, summertime, big cities, pedicures, dogs, YouTube, and obviosly anything beauty related!
Im very excited to be a part of the "beauty blogging" community now and look forward to getting to know other awesomely like minded people!